Former NYPD Commissioner Ray Kelly: “Racism Is Not Endemic In The US Police, Though There Are Racist Police Officers” 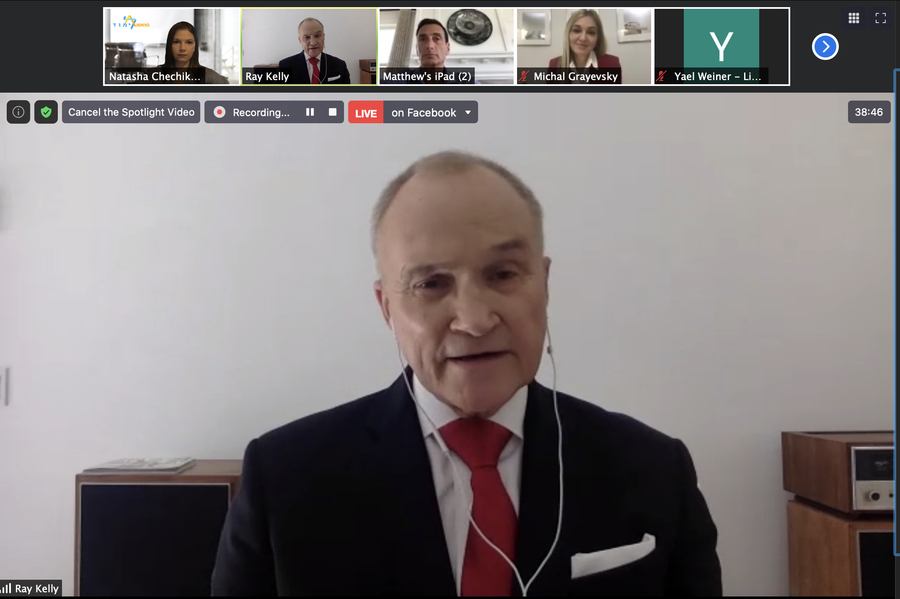 In an online interview that was broadcasted live and was conducted by Matthew Bronfman, chair of the International Steering Committee of Limmud FSU, Commissioner Kelly was hosted by the President of JCS International Michal Grayevsky.

NEW YORK, NY, July 15, 2020 /24-7PressRelease/ — In an online interview that was broadcasted live and was conducted by Matthew Bronfman, chair of the International Steering Committee of Limmud FSU, Commissioner Kelly was hosted by the President of JCS International Michal Grayevsky.

Kelly, the longest serving commissioner in the history of the NYPD and the first man to hold the post for two non-consecutive terms, said categorically that racism is not endemic or a systemic problem in US police forces. “I saw the video of George Floyd’s murder and it was a shock. I have seen police brutality, but it is normally a rash act. This was deliberate, studied; it was the worst incident of police brutality I have ever seen. The outrage is understandable.” But stressed Kelly, “this is not what police officers do. It doesn’t happen all the time. People become police officers to do good, and to risk their lives.” Nonetheless, he acknowledged, the police forces across the country need to do better at “weeding out racists and those not meant for the job.”

Limmud FSU generally mounts peer-led, volunteer-based gatherings of Jewish learning that specifically reach out to Russian-speaking Jews around the world. Yet in a project initiated by Limmud FSU founder Chaim Chesler, co – founder Sandra Cahn and produced by Limmud FSU deputy director Natasha Chechik, since the corona lockdown made physical conferences impossible, Limmud FSU has been providing digital e-learning opportunities on Jewish, general – and coronavirus – topics. Sessions have also been arranged by volunteer organizing committees of the festivals. These online gatherings are an opportunity for Russian-speaking Jews to learn – and be – together, virtually. President of Limmud FSU, Aaron G. Frenkel, also took part in the special meeting.

Specifically concerning the NYPD, Kelly noted that during his terms as commissioner, during which he reduced violent crime in the city by 40%, he placed a special focus on having the police force represent to the highest degree possible the level of heterogeneity that exists within the city’s population. “I brought in police officers who come from 106 different countries.”

Kelly warned against the current policy by which police officers, in New York and many other cities across the country, have been told to stand down in order to de-escalate tension, arguing precisely for the opposite approach – for the police to be more proactive. “Anti-crime units in New York were canceled, though they proved very effective in reducing crime,” and today, he said, people are more willing to challenge the police, while “there is no question that the police are backing off. They wear cameras, which some think is good, while others disagree, but it makes them act slower and with greater caution. They don’t engage as they once would have done. The result is increased violence and I don’t see us getting out of this situation any time soon.”

Changes in policing are also being impacted by the corona pandemic and its consequences on the city budget. “We have not yet come to terms with this,” he warned, suggesting that there will be a $9 billion hole in the city’s budget because of the superimposition of Covid-19 on business. “The Zoom economy is taking hold,” he said; “businesses are boarded up, there is no police presence, people feel comfortable being out of their office. This will impact on residential and commercial real estate.” Are we past the tipping point, Kelly was asked, responding that he is pessimistic about the future.

“We are in a dangerous place in history,” he warned, recognizing that New Yorkers do not feel safe going out onto the streets; “we need a change of administration in the city. There is precipitous gun violence, and we have to factor in the police hesitation in reacting. We need a change in direction,” he said categorically, “or the greatest city in the world will continue to go downhill. I hope things will improve after the next mayoral elections in 18 months.”

Turning his attention to policing and antisemitism, Kelly, who now heads Ronald Lauder’s Anti-Semitism Accountability Project, explained that at the head of a small team he visited more than ten European countries to meet government leaders and faith leaders and examine how these countries are addressing antisemitism, in comparison with and in contrast to the situation in US.

“Antisemitism there is not new,” said Kelly; “neo-Nazis have never gone away, and populism is helping them flex their muscles.” He also noted the impact of BDS from the left, and of the Muslim community, particularly in France, where, he argued, the country’s policy of laïcité, secularism, results in a situation in which the government does not recognize religion and is therefore investing insufficient resources in protecting religious minorities. Thus, he noted, while there is a law in France against racism, people can walk around the streets with antisemitic slogans plastered on their t-shirts without fear of arrest.

But, he warned, it is more difficult to identify antisemitic groups in the US, where they are more amorphous, and where antisemitic expression is more sophisticated. “Antisemitic groups hang out on the net – only 20% of which is registered, with the antisemitic activities taking place on the dark web,” where police and other national organizations have limited capacity to monitor activities and address them.

Yet, while in Europe, synagogues and Jewish centers use technological means to protect the premises and those inside, means bolstered by community volunteers, i. In the US, neither of these is the case, he said, quoting the murder of 11 worshippers in Pittsburgh’s Tree of Life synagogue in October 2018 and the attack six months later at the Chabad synagogue in Poway, California, in which one person was killed and three injured. “In US the Jewish community needs to be more alert about who is entering community premises,” said Kelly, warning that in today’s reality there cannot be an open environment in Jewish institutions.

Towards the end of the discussion, Mr. Bronfman asked Commissioner Kelly whether there is any hope of gun legislation in US. Noting that there are today more guns than people in the country, Kelly sounded a somber note on that as well, suggesting that the only real hope of addressing this is through closing the loophole that enables quasi-private individuals to sell guns to others without any background checks. “In the past”, he noted, “40% of the guns confiscated were purchased through these channels, and there would seem to be some consensus that this loophole needs to be closed.” Yet, he cautioned, “it won’t change the world much.”

When Boozing and intoxicants is the mantra of new age youth: These young guns from Haryana will win you over.